Let me tell you all this story. For some reason, initially, I had a slight instinct that this may be something that only women in LA deal with — or Taylor Swift. (Love all the Swifty comparisons?) However, upon venturing to Texas this past weekend and chatting with a friend in Chicago, these types men (narcissists) are wreaking havoc (and hell) all around the U.S. As my friend Shauna puts it, “Good men are a dying breed.”

Don’t get me wrong. I’m still hopeful. Surely Clay Matthews will exceed any expectations I may have. (Sorry, I had to.) But how discouraging is it when you go on date and meet guys and they aren’t able to fulfill your expectations? Not just the “maybe he’ll be a keeper” expectation, but even the “maybe we can be friends” expectation?

Or worse, you have no feeling for them at all. You don’t hate them, but you don’t like them either. It’s disappointing. I get it, you’re not going to have sparks nor get along with everyone, but it would be nice to “feel” something, if that makes any sense. I guess that’s God’s way of weeding out people you’re not supposed to be with?

Back to the Taylor Swift reference. I have a theory regarding Swifty: she only dates gays. She’s the Beard of the Year, my friends, and she will date the gays until the cows come home. This serves her two purposes: she doesn’t have to do jack crap with any of them, and when they break up with her, she can write about what a-holes they all are. I mean, she doesn’t knowingly date them because they’re gay. She just wonders why none of them have attempted to grab her boob in, oh, 10 months. The only person, I believe, wasn’t gay? John Mayer. I think he’s probably a real freak in the sheets and has probably flushed the opposite way (how I feel about most men who have had their pick of way too many women), but he’s mostly all for the ovaries.

SO, what I’m definitely not trying to say here is that I date gay men. Nope. I can confidently (well, 99% sure) say that all of my exes were straight. Unlike Swifty, I have a great gaydar, so I know when a man wants a hug-kiss-kiss routine or wants the horizontal handshake, if you get my drift.

Ed is a dude that saw me doing pilates and cardio kickboxing at the gym. I can’t emphasize how CREEPSTATIC it is when a man approaches a female at the gym. Anything you say is going to be weird. “I saw you breaking a real intense sweat in class!” “You have a great body.” “Let me teach you how to properly lift those dumbbells.” “Is your colon swollen?” Just kidding on the last one, but that definitely made me laugh.

I was racing out to my car (it was starting to rain) and he followed me there. It was real creepster-esque and it made me jump when I turned around and noticed him.

“Hi… I’m Ed. I saw you doing pilates and cardio kickboxing. You have a lot of stamina.” (See what I mean? Awkward.)

“Haha, you’re fiesty! I’m Ed.” (Being a bitch means fiesty if you say “yall” and have blonde hair.)

“So, I saw you and I was wondering, do you come here often? Because I have been wanting to take classes and didn’t know how they were.” (Unlucky for me, I am a talker.)

“Oh yeah, they’re great. They get crowded so come early.” Notice the zero ethusiasm in my punctuation, as depicted in my actual tone at that point.

“Well, you have a great body so I need to do whatever you doing!” At this point, I give him the death glare, which basically insinuates “You’re a creep” or “Go to hell,” when he does something that puts me at ease.

Do you know the hand flop? It’s basically when you’re holding your forearm up towards your shoulder, elbow bent, while the hand flops like a dead fish. Most commonly seen depicted in the movies to insinuate a male is homosexual.

At this point, I made a schiesty move and gave him my number. I figured having a gay accountability partner would great given it would force me to the gym and since most of the gays I know are super critical of people’s appearances, I would work extra hard to not look like a fatass.

So we hit up a few classes. He asks if I’m going to Zumba. Yes. I am. And let me tell you, his hips don’t lie. No man should be able to move their hips like that. I was confident that I had a single homosexual male on my hands, no questions ask.

Maybe after two classes together, I pretty much drop his calls because a) we wouldn’t talk during class, which was bizarre and b) I have nothing tied to this friendship. Apparently Ed was invested because the weekend my cell phone was stolen, I got my new one and had four voicemails in eight hours from him. Side note: voicmails annoy the crap out of me. Unless you’re confirming an appointment or telling me I won a million dollars, there’s no need to blab for five minutes when I can just call you back.

“Hey Kirbie! I think I saw you walk in to the gym. Come by the weight area and say hi!”

Of course I ignore this and finish up my workouts, then peace out. I have no desire to see this person, nor do I think I could have picked his face out of a crowd at this point.

Then, on a Monday morning, after endless no responses and straight up avoidance, I get this gem at 7:30 in the morning: 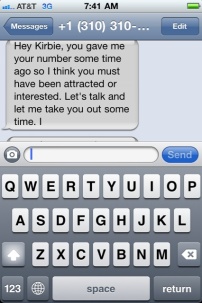 The follows up that text with something along the lines of, “I promise you won’t regret it :)” which really pissed me of because I’m already regretful of giving out my number and I hate it when men use smiley faces. So I respond with with the following, that I wish I had saved:

Hey Ed. Two things: A) It’s a tad inappropriate to be texting at 7:30, especially since I’m pretty much a stranger. B) I am sorry if I gave you the wrong impression, however I have a serious boyfriend that I’m very much in love with and I’m not looking to date anyone else. I stopped responding to your texts and would appreciate if you would stop sending them. Thanks for your understanding.

He wrote back with a “I’m sorry, I had no idea about your relationship. Good luck with that. Also, I didn’t realize 7:30 was too early.”

I had been up since 5:00 to work out, but it doesn’t matter. It’s not kosher to be texting someone you don’t know before normal business hours. Plus, this is LA, ED! Half the people here work nights. I’m semi concerned that this issue was so pressing that you felt the need to hash it out at 7:30 in the morning… Furthermore, “You must have been interested or attracted”? Really now? Instant turn off. Not like I was remotely attracted in the first place.

My point is this: why are men such idiots? When looking for a potentinal mate, I don’t ask for a lot. I’d like for him to be a man’s man, with a good heart, who is witty and intelligent, but not overbearing. I think most women will agree with me when I say I want a man. Someone who is confident in his own right but is always humble and does what is right because, well, it’s right. Not someone who is going to boast about everything, or change who he is for people to like him, or act like a child who has no control over his life. Who stays true to his word, isn’t a flake, and doesn’t play games.

Is that too much to ask?

Ladies, can I get an amen?