Guys. I’ve been SO INTO MTV PROGRAMMING lately! What is wrong with me? I’ve been an MTV baby from the get-go, but there were a few rough years around the time I graduated college. And now they’re back on track with this sh*tstorm of a show, Are You The One?, which is actually genius. It seems scripted at some points, but I like the premise and wish I had come up with it. Not to mention, the revamped version of The Real World is complete madness, which makes fabulous television. I just wish they would have kept the old school docu-style cameras a la the Hawaii season. Side note: COLIN AND AMAYA FOR-EV-ER. (I know there will be people reading this who won’t know who either of these folk are, and for that I will cry a single tear.)

That had nothing to do with anything. Moving on…

Alright ladies, what’s the worst pickup line you’ve heard? Have one in mind? Okay, take that, then imagine the guy peed himself while delivering it to you, while wearing a shirt with a naked picture of himself on it. That’s what it feels like when you get messages from (most) men on OKCupid: it’s more second-hand embarrassment anyone should have to deal with.

OKCupid is free. You get what you pay for. Which is, in fact, nothing, except for these offensive messages. Some are offensive in the sense of being vulgar and foul, but most are offensive because the grammar is so poor, the try-hards are in fact TRYING THE HARDEST, and overall it’s just a disappointing experience. But it’s free, so you feel like you haven’t lost anything. (Except your dignity…) So you forge ahead and hope someone fun, charismatic and maybe even attractive comes along! But don’t hold your breath.

I won’t get off of the site because I know that the messages would make great fodder for Mentervention. Without further ado, here’s what to do on OKCupid, apparently, if you’re a man. You can thank me later, dudes!

IF AT FIRST YOU DON’T SUCCEED Email incessantly, like these guys! Nothing is a bigger turn on than unappreciated persistence, self-doubt, and essentially talking to yourself. 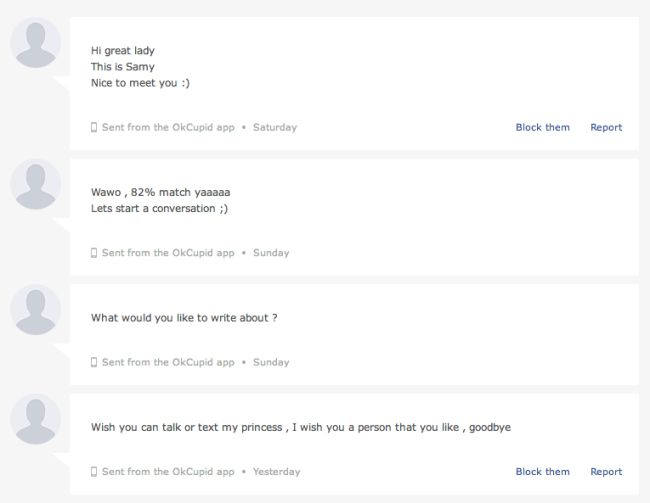 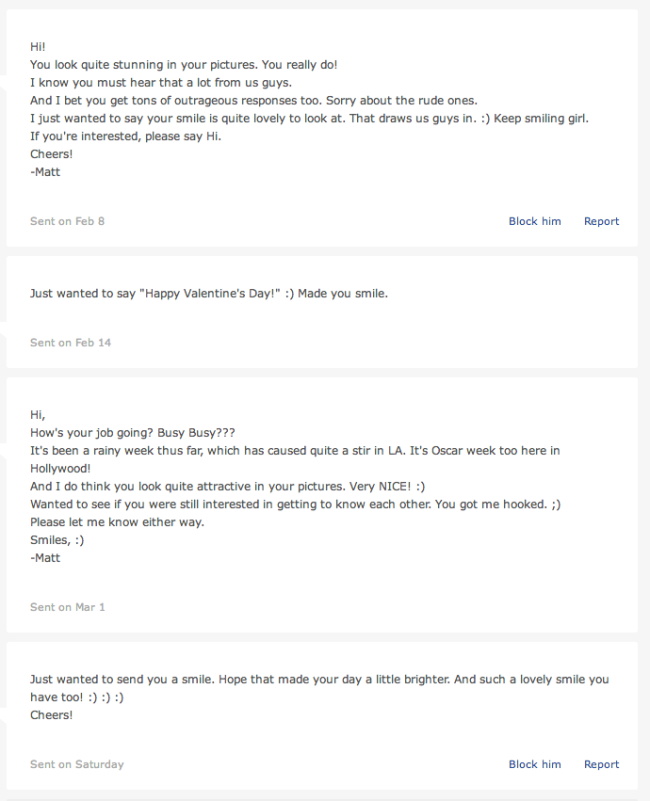 “If you’re interested, please say hi.” Oh, thank you! I didn’t realize that was the next step when you were actually interested in conversing with someone. You’ve shed new light on this site for me. And “if you were still interested in getting to know each other”? Not sure how I gave you that impression, as I literally DIDN’T WRITE ANYTHING.

This is not an application for The Bachelorette. A short paragraph would suffice. Also, “not sure how this online stuff works?” We have bigger fish to fry here.

INSULT ME! Reverse psychology, right? (Or make a craptastic joke that doesn’t get you anywhere.)

I’ve always wanted to go on a date where the dude tells me ahead of time he might not be attracted to me. Very reassuring!

DEGRADE ME! Women love being talked dirty to before ever meeting in the flesh. It’s like a sex hotline, only with the written word! (aka ICQ chat rooms circa 1998.)

If I wanted to play a game on the internet, I’d accept all of those Farmville requests on Facebook.

TELL ME HOW I WILL FEEL because you clearly know the depths of my soul, all based on my online dating profile and a bunch of idiotic questions I decided to answer.

CREEP ME THE F-CK OUT.

I imagine Jeffrey Dahmer saying something similar to that first message to his victims.

That’ll do for now, but more excerpts would be riddled with spelling and grammatical errors, condescending tones, and simple hellos which, as you can probably guess, don’t elicit any responses.

If any of you have actually found more-than-decent, spectacular men to date on this site, hats off. In the meantime, I’m going to keep collecting these messages for more posts.