I thought I was turning out to be the only person who thought men were complete and utter asshats UNTIL I WENT TO VEGAS.
(If you don’t want to read about the drunk wisdom I received from a British lad, scroll down — there are some real special OKCupid messages awaiting you. They’ll be the last of the bunch considering I deleted my account last week.)

While at TAO, a British lad by the name of Stephen approached myself and my two girlfriends and asked us to come to his table. If you’re a woman, you know the number one mission you should have in Vegas is to find hot men with a table of free alcohol to consume. I was patting myself on the back for this mission: accomplished when I started talking to Stephen a bit more and realized this was a divine intervention… or Mentervention, rather.

Were Stephen and I meant to be? DEFINITELY not. He had about six too many buttons unbuttoned on his shirt, I can guarantee you he was just trying to sleep with me (or one of my girlfriends — who knew at that point) and pretty much defined the term “British Playboy.” His friends were pulling the ultimate wingman move by telling all of us he was a royal and went to school with Pippa Middleton and Princess Beatrice. Shamefully, I was pretty close to believing them. Does the normal guy care or even know Princess Beatrice exists? Alas I knew it was all lies — lest any man doubt my knowledge of the royals — but a nice touch nonetheless. Anyway, talking to Stephen, he made a few comments that I found to be unbelievably brilliant. Maybe it was the alcohol, maybe it was his rather charming accent… but it all made so much sense. Don’t even ask me how this got brought up because I don’t remember:

(Please read in a British accent) “Men in America are quite idiotic. I’m serious. They run around and try to get women yet they only ask questions like, ‘What brings you here? Have you been here before?’ Just give it up already man! It’s even worse when they try to talk to other men. (Goes into his American accent) ‘Yo dude! What’s up bro? Yeah man, keep it real.’ What the bloody hell is that? I will tell you why men in America are a turnoff to women: because they don’t know how to hold a decent conversation.”

Now Stephen makes a valid point. I’m not saying this to make myself sound like some woman who is just overloaded with men approaching her — I’m definitely not — but this is a dating blog after all, so sue me. Anyway, just today some rando at Whole Foods came up and said, “You know what’s good?” Me, being oblivious, looked around, and responded, “What?” I thought he was going to tell me what was good. Then he’s like, “No, is there something you like here?” And at this point I’m privy to the fact that he’s just trying to talk to me, but I’m also really annoyed because I’ve been waiting 10 minutes to get a half a pound of sliced turkey. So I kind of just smile and say, “Nope, looks like all my favorites aren’t available today…” and he stands there and stares at me. Like a creeper. So I start to move when he says, “I don’t really care if you like anything, I just wanted an excuse to talk to you.”

Yeah, I couldn’t tell man. Here’s the thing: timing is everything. Read the signs, guys! If I’m on my phone and tapping my foot because the family of four in front of me can’t decide if they want smoked or roasted turkey breast, I am clearly not in the mood to chat. Maybe if you had told me a funny joke or wanted to commiserate with me, I’d be more up for it. But frankly I don’t want to discuss my favorite side dishes that I pick up from Whole Foods. Because really, do you even give a damn? No, you do not. This is what I mean.

If any man would have approached me like Stephen did in Vegas, I’d be excited to talk to him. Sure, the prospect of free alcohol was running through my brain, but his demeanor is what I’m referring to. He didn’t come across too arrogant or goofy or nervous. He wasn’t trying too hard. He was the right combination of confident, friendly and outgoing. He seemed genuinely curious about us and didn’t ask questions where we all were like, “He doesn’t give two shits about that… why is he asking?”

I don’t know if it was because we were American or what (and frankly I don’t care), but his conversation was good enough that all three of us ended up chatting with his group of friends until we (the girlfriends, not us and Stephen… need to clarify that) left the club that night. And sure, maybe his intentions weren’t genuine, but again, I DON’T CARE. It was Vegas. But it would be nice to meet a non-Vegas Stephen one day who wasn’t so into themselves and they actually took some time to create a meaningful conversation with a woman.

By meaningful, I don’t mean contemplating life and love and poetry and symbolism and all of that jazz. I mean, it can be about all that stuff too, but mostly I’m referring to a conversation that we can both relate to and understand at the time. Trying to get philisophical at the gym or the ball park or the grocery store is not appropo. Save it for the first date. But also, think about engaging in conversations that make us empathize or laugh and heck… make us think. Maybe it’s about your favorite band or a hard time you went through or a hilarious story that’s self-deprecating and amazing all at the same time. A conversation that you’re excited to be in and one that I know you’re not rolling your eyes about when I turn my head. A conversation where you not only share your part, but is, in fact, an actual conversation. One where you care about my response and react to it; one where you don’t have ulterior motives (to hit the sack, to build yourself up, to get sympathy, and so on).

I definitely don’t expect you to try to strike up a “What is love?” conversation in the deli meats section at Whole Foods, but please come up with something a little more intriguing than a question about what green I prefer with my steak. You dig? I’m sure the ladies will agree with me on all aforementioned accounts.

To conclude, I’m not saying all men in Vegas give opinions as wise as Stephen’s, either. And to think for a second that Stephen wasn’t a raging douchebag would be remiss on my part. I forgot to mention he was on Night #2 of his EIGHT DAY STAY IN VEGAS. I went for five nights, four days back in 2010 and I truly don’t know how I came out of that one alive. But then again, he put his number in my phone as “Sexy Stephen British.” So we’ll call it a draw when it comes to the “Undesirable Bro” debate. While he was a cheeky lad, he was witty and clever (including the term “British” made it easy to remember who he was the next day). He definitely had some “pros” to balance out his “cons.”

So based on this post, I guess you can either a) get interested  or b) try turning up the charm, guys. Take your pick.

Now on to some riveting messages from OKCupid! Yes, these are the final online dating messages I will post on here unless I decide to invest my love life in eHarmony or Match.com.

This is from some dude I didn’t respond to and it was sent at 1:15 PM. Yes, in the afternoon. So I can assume he wasn’t binge drinking at this point: 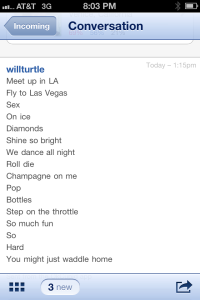 Meet up in LA

We dance all night

Step on the throttle

Since that one clearly needs no comment… on to this guy. I’m leaving out his handle because, apparently, it’s his whole name. But he’s 33 and this is what he thought would “woo” me enough to give a response: 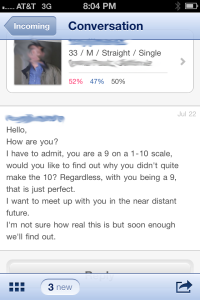 would you like to find out why you didn’t quite make the 10? Regardless, with you being a 9,

that is just perfect.

I want to meet up with you in the near distant future.

I’m not sure how real this is but soon enough we’ll find out.

So many questions here: 1) Where did it say I  gave a shit from shinola about what rating I got from you? Also, why are men obsessed with this rating system? (See here.) I don’t care why I didn’t make a 10 because a) I couldn’t care less about being rated and b) it’s clear from this message the reason you are still single is because you think telling women what they “rate” in your mind is a way to win their heart. You CLOWN. 2) Why is it “just perfect” that I’m a nine? 3) And “near distant?” Like Back to the Future? When you say, “real this is,” do you mean the internet? The connection you’re feeling over OKCupid? 4) What is up with this weird spacing? Okay I’m done.